You want to conquer the European market

Say you’re a producer or importer of motorcycle clothing and you want to conquer the European market.

Europe may seem to be a relatively simple sales area, but whatever you do, don’t underestimate the effort you need to put into marketing! 😊 DG Translations HAS THOUGHT ABOUT IT…

Take a look at the  European Union: open borders and a single currency in many countries. The distances are manageable. And the Europeans? Surely they’re all similar and speak at least two languages, so no problems there – right? 😊

Think again. Europe consists of 50 countries with around 742 million inhabitants and 107 different languages. The import trade often focuses on the 28 (soon to be 27) countries of the European Union, with 24 official languages. With French, German, English, Italian, and Spanish, you can reach around 70% of the people.

So does that mean that with five languages, you’ve got communication in Europe all sewn up? Far from it.

Even when you create content for the French, British or Dutch market, you come up against cultural differences. We regularly translate texts for a US manufacturer which feature – for our taste – an awful lot of superlatives, such as ‘awesome’, ‘tremendous’ and ‘we are the greatest’. When we translate this copy for the German market, we tone it down, in consultation with the client. This makes the texts more likely to be read, and read from beginning to end.

Europe may sometimes look like a single entity, but when it comes to language this is far from the truth. For this reason, we would strongly advise that you make the effort to create local content. Or the copy can be adapted to the local market during translation. This is called localisation. As well as converting the message better, this will ensure a higher position in the results shown by local search engines. This is at least as important,  because it helps you reach more customers and increase sales.

So go beyond a standard translation –  rewrite the translated text or make a transcreation. This means adapting a text from one language to the other, while retaining the intention, style, tone and context. And it ensures that any unwritten rules are ‘visible’ in the way in which the translated text has been produced. One example of unwritten rules are linguistic jokes and wordplay. Which jokes work and which are best avoided? Such details are located deep in the specific culture and you need to have been born in that culture and to have studied and lived there to know your way around.

So, if you have the possibility of advertising with local content, we would definitely recommend it!

In addition, the most important aspect when writing content is possibly the Value Propositions,  which are strengthened when they are combined with ‘local content’ written or translated at native language level.

DG Translations has translators who are well-versed in the subject of your text – they speak your language in every sense of the word. What’s more, they live where your target group is based and are steeped in that culture and language. The target language is their native language and language is a living thing, so our translators live and breathe that language. They have studied languages to a high academic level and know exactly what they can and cannot write. The best approach for SEO, powerful communication and your Value Proposition!

Please send us an email and we'll get back to you, asap. 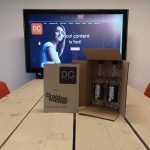